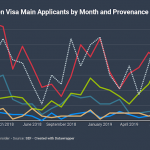 Approved applications cratered by 49% compared to August and investments fell from some EUR 83 million to EUR 49 million, figures released by the Borders and Immigration Service (SEF) today reveal.

Only 75 investors and their family members obtained ARIs last month, down from 147 in August. During the year to date, 998 main applicants and 1,736 dependents have received their residence permits through the ARI.

September, likely due to Portuguese summer holiday habits, has historically been a slow month for the country’s golden visa. Indeed, the last time monthly approved applications dipped below 80 was in September last year, when the SEF approved only 64 main applicants.

Overall investments slumped correspondingly; the program raised 48.5 million euros in September, compared to EUR 82.5 during the preceding month. During the year to date, 602 million euros have entered Portugal through the ARI. On a cumulative basis, since the program opened in November 2012, golden visa applicants have injected capital worth EUR 4.85 billion, nine-tenths of which in immovable property.

Want to know more about Portugal’s Golden Visa program? To see recent articles, statistics, official links, and more, visit its Program Page. To see which firms can assist with applications to the program, explore the Residence & Citizenship by Investment Company Directory.